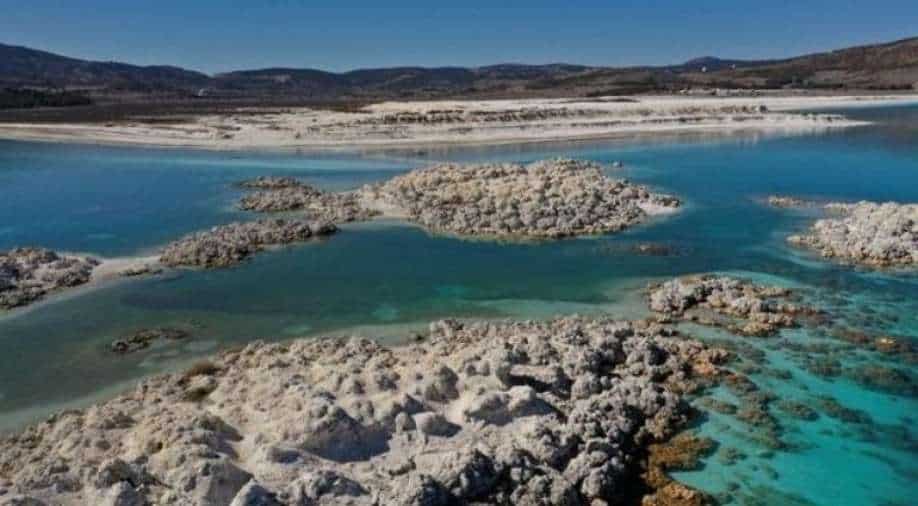 Boasting azure waters and white sands, a Turkish lake that NASA thinks hides secrets about Mars threatens to become too popular for its own good.

Lake Salda gained international renown when US scientists began poking around in preparation for the Perseverance rover mission, which has been beaming back videos from the Red Planet since February.

The Jet Propulsion Laboratory even posted a picture of the pristine lake on its site before touchdown, saying it might resemble what an “aqueous” Mars looked like billions of years ago.

Now, the 4,370-hectare (16.9-square mile) lake in Turkey’s southwest has been picked by President Recep Tayyip Erdogan as part of a project to create more green spaces for public use.

The news spells disaster for local activists and lawyers, who fear that the twin blows of NASA and Erdogan’s interest could open the floodgates to tourists.

Splashing around in its waters, the sea of humanity could destroy the very ecosystem that made the lake special in the first place, campaigners warn.

“The future of the lake is at risk if millions of people come,” said Lake Salda Preservation Association head Gazi Osman Sakar.

The lake is most famous for the White Islands area with the brilliant sands, as well as endemic flora and fauna such as the Salda seaweed fish.

There are also minerals of different origin. NASA thinks one of them, hydromagnesite, is similar to the carbonate minerals detected at Jezero Crater — a former lake on Mars that the rover is now exploring.

The hydromagnesite sediments along Lake Salda’s shoreline “are thought to have eroded from large mounds called ‘microbialites’, rocks formed with the help of microbes,” NASA said.

This all folds into the mystery about possible life on Mars, in some microbial form a very long time ago.

There are many tectonic lakes like Salda across the world.

But what makes Salda unique, geology engineer Servet Cevni said, is the lake’s transformation into a closed ecosystem with its own living mechanism.

“Because it’s alive, it’s so sensitive to outside interventions,” Cevni said.

Yet that intervention is already on its way in the form of nine small buildings that have appeared near a planned People’s Garden by the lake.

Sakar said some of the white sand has already been moved from the White Islands area to another called People’s Beach for road construction.

“The project should be cancelled,” Sakar said. “The lake cannot be protected while it’s used.”

Swimming is forbidden at the White Islands but people are still able to take a dip in other parts.

Sakar’s association wants the lake off limits entirely for swimming to preserve its ecosystem. Instead, he proposes creating observation posts for visitors to see the lake.

“If single-cell organisms die, Salda is finished,” the engineer Cevni agreed. “Those White Islands won’t be renewed, that white structure won’t come together.”

The damage thus far can be recovered in 150 to 200 years if people do not destroy it further, Cevni said, adding: “If we do, it won’t ever recover.”

The Lake Salda Preservation Association has seen its legal bid to cancel the green spaces project rejected in court.

Sakar is appealing the ruling and also campaigning for UNESCO to put Salda on the world heritage list.

But campaigners are not the only ones expressing concern.

Aysel Cig, a goat-herder who lives in a village close to the lake, said things were more pleasant before Salda gained its fame.

“Our lake, our village was much cleaner three, five years ago,” she said.

But besides dirt and foreign organisms, tourists also bring cash, which the locals around Lake Salda welcome.

Suleyman Kilickan, 60, worked in a cafe with plenty of outdoor seating by the lake that employed 30 people before the coronavirus pandemic hit.

Interest in the lake rose considerably with the NASA mission, Kilickan said, noting that most of his visitors were foreigners who appeared to be respectful of the lake.

“I would encourage tourism,” he said, emphasising the importance of ensuring visitors act responsibly.

The environment ministry said last month it would limit the number of visitors to the White Islands area to 570,000 a year.

Nearly 1.5 million people visited the lake in 2019, and 800,000 came last year during lulls in coronavirus restrictions.

But Nazli Oral Erkan, of the Burdur Bar Association’s Environment Committee, said the proposed cap was not enough to protect the lake.

Firefly Aerospace's Alpha rocket was unable to lift off from Vandenberg Space Force Base, California. A … END_OF_DOCUMENT_TOKEN_TO_BE_REPLACED

Hello there and thanks for joining this latest MARCA In English financial news live blog this Friday, September 30, with this being the space where we … END_OF_DOCUMENT_TOKEN_TO_BE_REPLACED