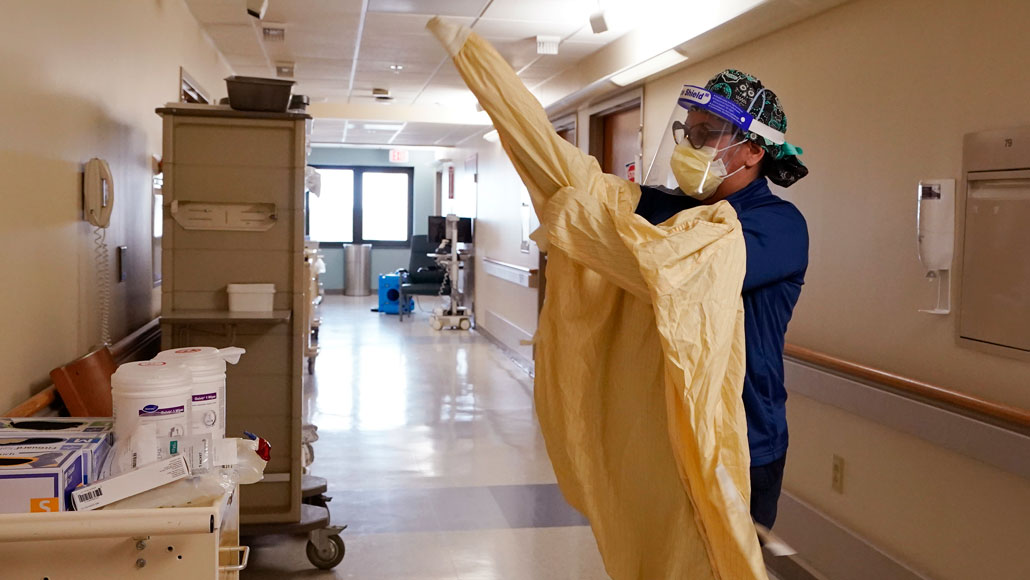 When COVID-19 cases once again began rising in the United States this spring, it may have felt like déjà vu, a repeat of the early months of the pandemic. While cases are now starting to drop in many, but not all, of the hot spots, the country is still seeing upwards of 50,000 new cases a day, and for a few days in mid-April, those numbers topped 70,000, according to the U.S. Centers for Disease Control and Prevention. This may seem more manageable than the 200,000-plus case days in December and January, but the latest numbers are comparable to the case counts during last summer’s surge.

This time, though, the demographics of many of the people getting sick are different: While it varies by state, they’re typically younger, and remain at risk because they are not yet vaccinated. More transmissible coronavirus variants, particularly one called B.1.1.7, appear to be driving the new surge. And, as businesses continue to reopen and vaccination efforts run into low demand, public health experts worry that the same communities that have been vulnerable throughout the pandemic may be hit hard all over again.

New cases by the numbers

In the past year, demographic trends among individuals infected with COVID-19 have shown that adults over the age of 65 have been more likely to die from the disease. Black residents, Hispanic/Latino residents and other minority groups, have been both more likely to get sick and more likely to face severe illness. Now, however, vaccinations are protecting a majority of seniors, while many minority communities and not-yet-vaccinated younger adults, those under age 50, remain vulnerable to infection.

And this younger crowd isn’t just getting asymptomatic or mild COVID-19 cases: A greater share of those now hospitalized are younger adults compared to their share of total hospitalizations in earlier months. Nationwide, about 9,000 COVID-19 patients under age 50 were admitted to hospitals in the second week of April, compared with about 6,000 people in that age group a month earlier — while admissions for patients over age 60 have stayed at constant levels since late February.

This trend is more pronounced in states with surging case numbers. Michigan, for example, saw about 1,000 new adult patients under age 50 admitted to the hospital with confirmed COVID-19 cases in the week ending April 9, compared with under 300 patients in that age group in the first week of 2021, during the peak of the winter surge. Those younger patients made up just 17 percent of all patients in Michigan during that earlier week, but 29 percent three months later.

Vaccinations do help. Yet while younger adults reached the front of the vaccine line only in recent weeks, many eligible residents in minority communities have struggled to get a vaccine since the rollout began. Polling data show that they are just as willing (if not more) to get vaccinated than their white neighbors, but are having trouble getting access to shots. A majority of states, for example, have vaccinated at least 25 percent of their white populations, according to Bloomberg’s vaccine tracker, but only 12 states have vaccinated the same share of their Black populations as of April 26. And only nine states have reached that milestone with Hispanic/Latino populations.

These numbers are concerning, says Enrique Neblett, a health behavior expert at the University of Michigan in Ann Arbor and associate director of the Detroit Community-Academic Urban Research Center. Neblett has seen how access issues disrupt vaccination first-hand through his work in Detroit. “The folks on the ground [community organizers in Detroit] were saying things like, they were not seeing a lot of hesitancy, but it was more around access to the vaccine, transportation, work hours,” he says. These barriers are common in already-vulnerable communities, leaving individuals living there more susceptible during this new surge, he says.

See all our coverage of the coronavirus outbreak

That vulnerability has consequences. During the winter of 2020, racial and ethnic disparities in COVID-19 hospitalization rates became less severe compared with the earlier months of the pandemic. But Neblett says he worries that a lack of vaccine access, coupled with the longstanding differences in health care access, employment and other institutional and culture factors that caused these COVID-19 disparities in the first place, may revert this pattern in the coming months (SN: 4/10/20).

“It’s really hard to say, but I do think if we don’t get a handle on this, it’s very likely that we could see those disparities start to increase again,” he says.

One reason for the rise in cases is that the coronavirus is mutating, creating variants of the original SARS-CoV-2 virus that initially seeded infections. B.1.1.7, a variant first identified in the United Kingdom, was causing more cases in the United States than any other version of the coronavirus — an estimated 59 percent of cases nationwide as of April 10, according to the CDC.

COVID-19 vaccines currently in use in the United States are demonstrably effective against B.1.1.7, meaning you may be protected from severe disease even if you get sick with this variant. But B.1.1.7 is estimated to be between 40 percent to 70 percent more transmissible, so it can spread more easily among people who haven’t yet received a vaccine (SN: 4/19/21).

“There’s almost two pandemics happening,” says Will Lee, head of science at the genomics company Helix, which has been working with the CDC to track variant cases through testing and genetic sequencing. “One of which is original SARS-CoV-2, and the other one, which is B.1.1.7.” Since B.1.1.7 is so much more transmissible, Lee says, we can think of it as akin to a new disease, with its own infection patterns and outbreaks.

Lee says that the United Kingdom’s winter outbreak shows how B.1.1.7 cases can rise in a region even as cases caused by older variants decrease. Michigan’s surge in cases is following a similar pattern. From mid-March to mid-April, B.1.1.7 made up an estimated 70 percent of cases in the state, which had identified its first case with the variant only in mid-January. And the variant is clearly having an impact: Michigan accounted for 10 percent of new COVID-19 cases nationwide the week of April 8 to 14, while the state represents only 3 percent of the nation’s population. Hospitals in the state cancelled elective surgeries to cope with the surge of COVID-19 patients. And Michigan is not the only state with a B.1.1.7 problem: almost three in four cases in Tennessee, Minnesota and Florida are now caused by B.1.1.7, the CDC reports.

Meanwhile, other parts of the country are dealing with other variants that are not as well-studied. In California, 39 percent of cases are caused by B.1.427/B.1.429, a pair of variants that are more transmissible and not as responsive to the drugs that doctors have been using to treat COVID-19. The California variants are also spreading readily in Arizona (31 percent of cases), Colorado (25 percent) and other states in the Midwest. A home-grown variant has been identified in New York City, too, and that one is causing more than 1 in 10 cases nationwide.

It takes time to do the genetic testing needed to identify these variant cases — and the United States is still struggling to scale up its national surveillance efforts — so these data are a snapshot from mid-April. Since then, the new outbreaks from B.1.1.7 and other variants have likely grown.

That said, variants aren’t fully to blame for the steep rise in cases. “I don’t think there’s ever any one factor that drives everything we see,” says Natalie Dean, a biostatistician at the University of Florida in Gainesville. While B.1.1.7 and other emerging variants can speed up case increases, Dean notes, there have been other contributing factors in recent months, such as businesses reopening and behavior changes putting people in closer quarters, spurring the virus’ spread.

States from California to Connecticut have eased up on mask mandates, indoor capacity limits and other restrictions. Such reopenings can drive outbreaks in larger communities as people who get infected at a restaurant or a football game interact with others who did not choose to enter a riskier setting (SN: 6/18/20).

Prisons and jails are particularly likely to cause outbreaks in their surrounding communities, too. Many incarcerated Americans have yet to be vaccinated — unlike nursing home residents, another group living in close quarters. Bellamy Creek Correctional Facility, a prison in Michigan, was a major B.1.1.7 outbreak site in February, which seeded other cases in the state.

Still, amid this latest surge, there’s one crucial metric that has stayed mercifully low: the death rate. The daily average for deaths has stayed below 1,000 since mid-March. This number suggests in part that, so far, the vaccines are protecting many of the most vulnerable.

But that’s not enough. In order for us to control the new rise in cases, the United States will need enough people vaccinated to stop new infections. Dean considers Michigan as a warning to other states of how quickly new outbreaks may pick up, but she says it’s not a foregone conclusion.

“Every day that we vaccinate more people, we’re making that [trajectory] less likely,” she says.

The Westfield Town Council voted 7-1 on Tuesday to introduce an ordinance that allows for a downtown redevelopment plan to move forward.It will next … END_OF_DOCUMENT_TOKEN_TO_BE_REPLACED

New York CNN  —  Bed Bath and Beyond is closing another 87 stores as the struggling retailer barrels toward bankruptcy. … END_OF_DOCUMENT_TOKEN_TO_BE_REPLACED