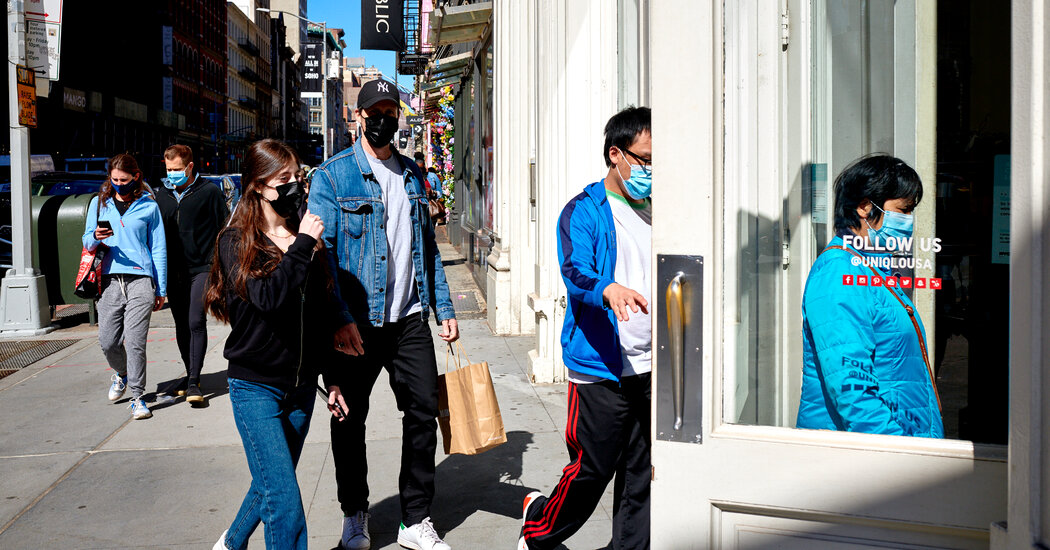 (Want to get this newsletter in your inbox? Here’s the sign-up.)

1. The economy is rebounding and on track to reach prepandemic levels.

Bolstered by stimulus checks and an easing of restrictions in many parts of the country, the U.S. economy is shaking off some of the lingering effects of the coronavirus pandemic. The first-quarter growth rate reached 6.4 percent, and economists expect overall economic activity to return to prepandemic levels in the current quarter.

Consumer spending is up. Amazon reported $108.5 billion in sales in the first three months of the year, up by 44 percent from a year earlier. It also posted $8.1 billion in profit.

While the economy is almost back, the recovery is profoundly unequal across sectors, unbalanced in ways that have big implications for businesses and workers, our senior economics correspondent writes.

The bad news: Consumer goods are going to be more expensive. Retailers that absorbed higher costs in 2020 are rebalancing pricing to fit profit expectations and also to take inflation into account.

2. President Biden justified his broad vision to remake the American economy as a necessary step to compete with China.

In his address to Congress yesterday, Biden argued that the U.S. must prove that democracies can deliver and can continue to out-innovate and outproduce the world’s most successful authoritarian state, our national security correspondent writes in an analysis.

He and Vice President Kamala Harris hit the road this morning to sell his economic agenda to the public. Biden’s first stop was in Georgia, where he visited with former President Jimmy Carter, while Harris went to Baltimore to tour a vaccination site.

Mayor Bill de Blasio said he wanted New York to fully reopen on July 1, allowing restaurants, shops and stadiums to operate at full capacity. Broadway, he said, was on track to open in September.

However, de Blasio said he had not spoken to Gov. Andrew Cuomo about his plan. Mr. Cuomo emphasized at a separate news conference that the state was in charge of managing the reopening.

4. The Covid crisis in Latin America is taking an alarming turn for the worse, potentially threatening the progress made well beyond its borders.

The region accounted for 35 percent of all Covid-19 deaths in the world last week, with just 8 percent of the global population, according to data compiled by The Times. Above, workers bury bodies in São Paolo.

If Latin America fails to contain the virus — or if the world fails to step in to help it — new, more dangerous variants may emerge.

Associates of the jailed opposition leader have been forced to disband his network of 40 regional offices, a move that seems likely to push the resistance to President Vladimir Putin further underground. Above, a worker paints over street art featuring Navalny.

An aide to Navalny said the decision was inevitable as prosecutors seek to declare his movement an extremist organization.

Navalny returned to public view for the first time since he ended a 24-day hunger strike last week. During a virtual court appearance, he appeared gaunt but vowed to keep fighting the “emperor with no clothes” in the Kremlin.

6. Germany’s high court ruled in favor of young climate activists and ordered the government to step up plans to cut carbon emissions.

The decision came as a rebuke to Chancellor Angela Merkel’s government, which drafted a law in 2019 aimed at bringing carbon emissions down to nearly zero by 2050, but included detailed goals only through 2030. The activists who filed the suit ranged in age from 15-24. Above, a climate demonstration in Berlin last fall.

Separately, the Inter-American Court of Human Rights will determine if the Honduran government is responsible for a transgender woman’s death 12 years ago, a decision that may force governments to better protect transgender people in a region where they are often targeted.

7. The Food and Drug Administration announced a plan to ban menthol cigarettes and all flavored cigars.

The menthol flavor, the agency says, makes it easier for those trying their first cigarette to become addicted and then tougher to quit. Since the 1950s, the cigarettes have been aggressively marketed to Black smokers in the U.S. According to the F.D.A., roughly 85 percent of Black smokers now use menthol products, like the ones above made by Newport.

Perimenopause is the onset of menopause, which is when a woman stops menstruating. Over one billion women around the world will have gone through perimenopause by 2025, with many experiencing symptoms like hot flashes, sleep disruption and depression. But largely because of taboos concerning women’s bodily functions, many are unaware of what it involves until they experience it themselves.

Now, “femtech” companies are moving into the market, books are being published and prominent figures like Michelle Obama are talking about how to cope. The shifting narrative has helped highlight a range of treatments, including hormone therapy and birth control pills.

Predicting the first round of the draft is especially tough this year, after the pandemic battered the 2020 college football season. More than 100 Division I players opted not to play, and the traditional scouting combine was canceled.

But many forecasters still believe five out of the top 10 picks will be quarterbacks, a first. Most agree that Trevor Lawrence of Clemson, above, will go to the Jaguars and Zach Wilson of Brigham Young will go to the Jets, filling the first two spots. Follow our live briefing here.

10. And finally, they saw each other and wept.

After a year of excruciating lockdowns, visitations have finally resumed in nursing homes — the sites of nearly a third of all coronavirus-related deaths. The Times sent photographers across the country to capture the reunions.

“It was really good that he knew who we were,” said Wayne Tinkler, referring to his father, Jim, above center, who has dementia. “Just him knowing that we were there, that we were back, was a huge relief.”

Have a joyful evening.

Your Evening Briefing is posted at 6 p.m. Eastern.

Want to catch up on past briefings? You can browse them here.

What did you like? What do you want to see here? Let us know at briefing@nytimes.com.

Here is today’s Mini Crossword and Spelling Bee. If you’re in the mood to play more, find all our games here.

The Westfield Town Council voted 7-1 on Tuesday to introduce an ordinance that allows for a downtown redevelopment plan to move forward.It will next … END_OF_DOCUMENT_TOKEN_TO_BE_REPLACED

New York CNN  —  Bed Bath and Beyond is closing another 87 stores as the struggling retailer barrels toward bankruptcy. … END_OF_DOCUMENT_TOKEN_TO_BE_REPLACED