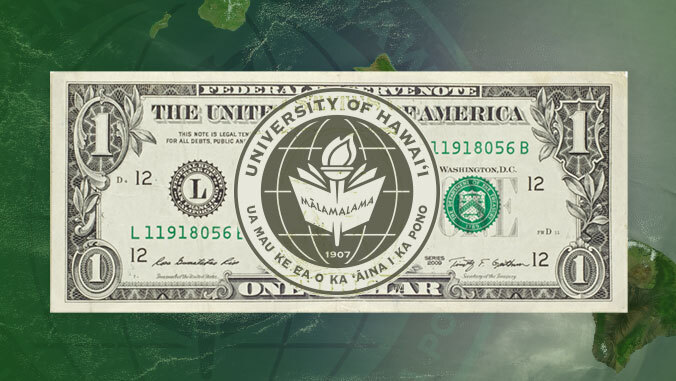 According to the report, the state general fund appropriations of $507.6 million resulted in total UH-related expenditures of approximately $2.31 billion in fiscal year 2020. That further generated $3.66 billion in local business sales, $1.02 billion in employee earnings and $186 million in state tax revenue, along with tens of thousands of jobs. That makes the state’s public higher education system a major economic sector in Hawaiʻi alongside its critical contributions to education, workforce development, research on Hawaiʻi’s challenges, and service to people and businesses across the islands.

This 2020 follow up to a 2013 report estimated the UH System’s economic activity in direct, indirect and induced economic activities generated by UH-related spending in the state economy.

“In terms of total output, we estimate that UH represented about 3% of the state’s economy, putting it ahead of agriculture (less than 1%) and utilities (2%), and just behind finance and insurance (4.5%), retail (6%) and construction and healthcare (7% each),” said UHERO Economist Kimberly Burnett, the lead author of the UHERO report. “The UH system is unique as it is both a key economic sector while also providing world class research and educating the workforce necessary for the rest of our state’s economic sectors.”

The report also estimated the long-range economic benefits of a UH education and found lifetime earnings increases for UH graduates of $300,000 for an associate degree, $1.5 million for a bachelor’s degree and $2.87 million for a postgraduate degree. In all, the students who were awarded a total of 9,345 degrees in 2020 are estimated to earn an additional $7 billion over their lifetimes beyond what they would have earned with only a high school diploma, net of tuition, fees, and forgone earnings.

National studies have noted the affordability of a college education in Hawaiʻi. For the Hawaiʻi bachelor’s degree college class of 2019, just 43% of our graduates left college with student debt, the lowest percentage of any state in the country. And for those who did graduate with debt, the average amount was $23,577, 6th lowest in the country. The UH-only numbers are slightly better than the state averages.

“This report clearly shows that every dollar invested in UH is a dollar well spent both for short- and long-term economic impact as well as for the students who are our future citizens and taxpayers, and for the long-term positive impact on our society,” said UH President David Lassner. “College graduates not only earn more over their lifetimes but they live longer, pay more in taxes, and are less likely to be on government assistance. Their children are more likely to attend college so the benefits are multi-generational and lasting. There is no better investment in the future of Hawaiʻi than our public university system.”

Of the FY 2020 $2.3 billion in expenditures, $507.6 million was from state general funds. University-related spending is several times larger than the general fund allocation because with every state dollar, UH leverages additional revenue from tuition and fees, other student spending, and research funding UH faculty and staff compete to bring into the state from private companies and foundations as well as federal agencies such as the NSF, NIH, NASA, Department of Education, and Department of Health and Human Services.

“The research conducted by the university brings hundreds of millions of dollars into the state each year that not only support the local economy and jobs, but also fund vital research that helps better the lives of the people of Hawaiʻi and the world,” said UH Vice President for Research and Innovation Vassilis Syrmos.

Data for this report were collected from a variety of sources, including the university’s Kuali Financial System, Research Corporation of the University of Hawaiʻi, UH Foundation, UH System Institutional Research and Analysis Office, and the State Department of Business, Economic Development and Tourism.

UHERO is housed in the UH Mānoa College of Social Sciences.

Ray Al-Malt spent much of his Tuesday in Orlando, Florida, preparing for rain and high-speed winds. Ray … END_OF_DOCUMENT_TOKEN_TO_BE_REPLACED

Hello again everybody and welcome to our live blog with all of the latest financial news coming out of the United States this Saturday, October 1. Our … END_OF_DOCUMENT_TOKEN_TO_BE_REPLACED