April might just be the beginning of Rhode Island’s recovery from the pandemic. While what we have been experiencing is not a recession in the usual sense of a cyclical decline, we are nonetheless continuing to move beyond what is more aptly described as a suppression, the forced shutting down of our state’s economy. Whatever we call it, this time really will be different, based on all the monetary and fiscal stimulus as well as the reopening of large segments of our state’s economy.

The path back to the pre-pandemic economy should (key word) be more rapid than has been the case in the past, which is particularly good news to Rhode Island since it avoided the FI of FILO and will likely experience a somewhat truncated LO. At any rate, the good news is that the Current Conditions Index for April rose all the way to 75, its first expansion value since February of last year, as nine of the twelve indicators improved. Before getting too carried away with this month’s performance, though, it must be noted that the “comps” for this month (last April), were exceedingly weak.

Our state’s economy had fallen so far a year ago that it was virtually impossible for it to decline much further. But that’s how recoveries typically start — things fall so far, it is almost impossible for them to decline any further. Employment Services Jobs, for example, a leading labor market indicator, improved by 37.2 percent in April. But last April, it had fallen by 33.4 percent relative to a year earlier. How do we not beat that? Total Manufacturing Hours rose sharply this month (+24.9%), but that was compared to a decline of 21.9 percent last year. You get the idea. What we will now begin to witness is a period where aggregate values continue to move back to pre-pandemic levels. While that might make it appear we are returning to “normal,” that won’t really be the case.GET THE LATEST BREAKING NEWS HERE — SIGN UP FOR GOLOCAL FREE DAILY EBLAST

Things will be very different when we “recover,” notably because of the loss of many small businesses and structural changes in the way firms produce their goods and services, especially the automation of numerous facets of businesses. So, while we will continue to approach where we were statistically, many gaps in what exists or how things are done will remain. Aggregate numbers tend to conceal important compositional changes. 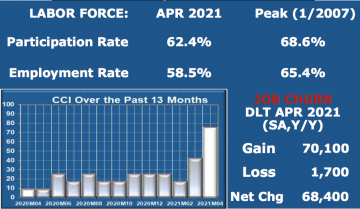 At any rate, some economic statistics for April were truly stunning. What struck me most was the year-over-year improvements in payroll employment, 68,400, and Single-Unit Permits, which rose by 91.7 percent, almost doubling its value from last April. And unlike the only recently improving indicators, Retail Sales, the “star” indicator throughout the pandemic, remained very strong, growing by 53.9 percent versus last April (which showed a decline of 17.5 percent).

The Monthly CCI for April was also 75, as nine of its twelve indicators improved. The momentum it has been displaying over the last several months appears to now be to showing up in yearly CCI values, at least for this month, bringing about an expansion level at long last.

Clearly, Rhode Island’s economy is continuing to move toward a period of consistent expansion and with that the end (statistically at least) of the pandemic-induced recession.

The University of Plymouth, the AHSN Network and Boehringer Ingelheim, has launched evidence-based recommendations to drive inclusive digital health … END_OF_DOCUMENT_TOKEN_TO_BE_REPLACED

This year’s Rising Stars of Private Equity has been published at a time of great uncertainty for the sector, as the young professionals on our list … END_OF_DOCUMENT_TOKEN_TO_BE_REPLACED

If you know of local business openings or closings, please notify us here.PREVIOUS OPENINGS AND CLOSINGS· Air Products and Chemicals Inc.'s chosen … END_OF_DOCUMENT_TOKEN_TO_BE_REPLACED