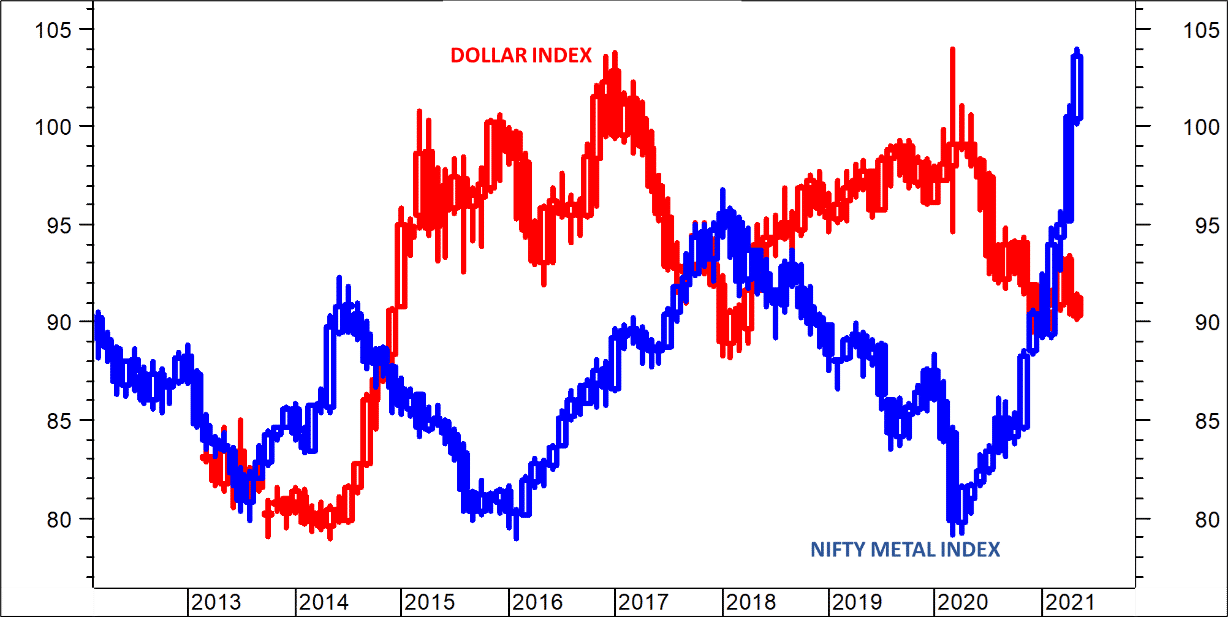 A weakening US dollar has aided what could be one of the phases of a possible COMMODITY SUPER CYCLE. In fact, the last supercycle near the start of the 21st century was also supported by steadily eroding the US dollar.

The currency had been on a depreciating path since the bursting of the dot-com bubble in 2001. It touched record low levels just as oil prices hit all-time highs in the year 2008. Since then, the U.S. dollar has been appreciating until the onset of Covid-19.

Why is the DOLLAR INDEX slipping away?

The US Federal Reserve has joined other central banks in the zero-interest-rate policy (“ZIRP”) club as it has pulled all its levers to support the US economy.

A weak dollar often feeds into higher commodity prices. In fact, we have seen this correlation playing out recently in 2016-2018 as well. That was the time when DOLLAR INDEX fell sharply from 103 to almost 88, and commodity stocks, specifically NSE METAL INDEX almost TRIPLED in that timeframe. That’s how intense and important this mechanical correlation is.

Fundamentally, raw materials are almost always priced in US dollars, so a producer often needs to adjust prices upwards to offset the higher production costs in local currency. And on the demand side, a lower US dollar means that all else equal, commodities have become cheaper for an importing nation, leading to higher demand.

In this backdrop, we assess which is the highest performing commodity which has done exceptionally well as compared to its peers. And the answer to that has been COPPER which has done exceptionally well in the past 1 year, rising up almost 2x. The nearest counterpart is PALM OIL, followed by ZINC, NIKEL, ALUMINIUM, and so on so forth. Lead so far has been the relative underperformer as compared to the others. 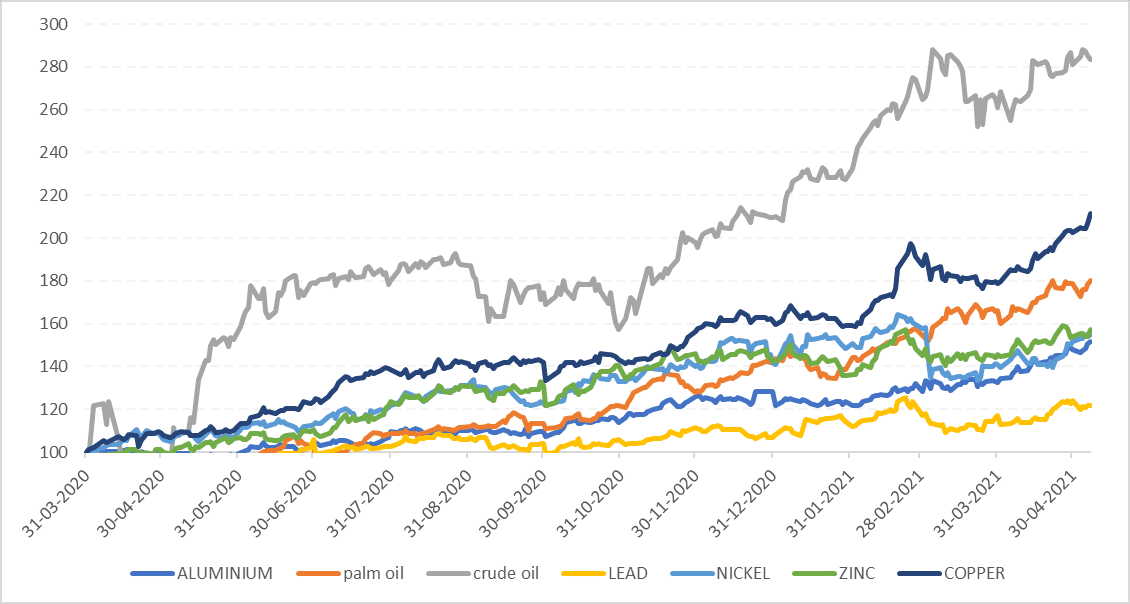 The idea of a commodity supercycle is further supported by pent-up demand that could be unleashed once economies reopen. And many believe that governments won’t embrace the same austerity policies that they applied after the great financial crisis. Government spending is also one key pillar supporting the supercycle hypothesis.

Beyond oil, natural gas is a commodity that can act as a bridge fuel between coal and renewable energy.

Steel prices are already seen to climb to disproportionate highs primarily due to supply disruptions and a possible GLOBAL industrial growth cycle as well.

Genuine commodity supercycles don’t come often. In a century typically only 3-4 supercycles occur, but they are so impactful that they result in TRANSFORMATIONAL periods of economic development across the globe.

Has COVID pushed us or accelerated us towards one such SUPERCYCLE, that’s the biggest question that needs to be answered. The factors around us do provide support to this thesis, but it will still be too early to judge it.

However, as COMMODITY BULLS we need to enjoy this till the time it lasts.

Harrison Butker is going to be playing for another Super Bowl with the Kansas City Chiefs.Butker nailed the game-winning field goal to send the Chiefs … END_OF_DOCUMENT_TOKEN_TO_BE_REPLACED