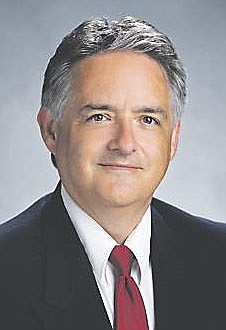 In announcing that he will not seek a third term this November, he said: “Eight years is good.”

A rabid baseball fan, Widmyer also tossed a Yogi Berra quote out on the table at one of the businesses he owns, Fort Ground Grill: “When you come to a fork in the road, take it.”

The fork will lead him to increased commitments in leisure and business, no doubt making more frequent visits to Seattle Mariners games and managing his real estate and other investments higher priorities.

That’s not to say Widmyer hasn’t faced his share of challenges over the past seven and a half years. One of his community’s greatest blessings over that time has also become a curse, one that will long outlast his mayoral tenure: Growth.

In fact, earlier Tuesday morning, Widmyer noted that the day’s Wall Street Journal listed Coeur d’Alene No. 1 in the nation on “which housing markets are expected to provide both a strong return on investment — and are a nice place to live.” The article was accompanied by a photo of people walking their dogs in McEuen Park.

“It’s good news because we have a fantastic quality of life here,” Widmyer said of WSJ’s national acknowledgment.

People are flocking here from Seattle, Portland and elsewhere, he noted.

But the solution is also a problem.

“The biggest challenge for the next mayor and council is housing affordability,” he said. “That will drive a lot about what the city can do.”

Looking back, Widmyer lauded accomplishments as plural, not singular. And not overstated.

Among those accomplishments, he listed effectively filling 10 of 13 city department head positions that had opened.

Continually strengthening public safety is another point of pride.

“Public safety is the most important job,” he said. “We’ve committed a lot, in personnel and equipment, in a time of extreme growth.”

Creating Atlas Waterfront Park on the riverbank of the Spokane River is another gem in the city’s crown.

“We’ve continued the tradition of adding to our parks,” he said, adding that the makeover of Memorial Field in downtown Coeur d’Alene is another big plus for the community — and for him personally.

“Memorial Field is just a fantastic improvement, near and dear to my heart because I played there back when Charlie Nipp was the field supervisor,” Widmyer said.

The mayor put an interesting twist on managing during the pandemic, a time that saw extreme tension including downtown demonstrations, threats of recalling council members who imposed a mask mandate, and heightened unruliness at downtown drinking establishments.

He said that if we were in the midst of the pandemic now, rather than near the end, he might be seeking another term.

“I’m not one to quit in the middle of something,” he said.

Until he turns over the reins of city leadership in eight months, Widmyer said he promises not to become a slacker.

“I’m going to make sure the people of Coeur d’Alene get their money’s worth,” he said.

This year Democracy Now! is celebrating our 25th anniversary—that’s 25 years of bringing you fearless, independent journalism. Since our first … END_OF_DOCUMENT_TOKEN_TO_BE_REPLACED

A new report commissioned by the Canadian Medical Association (CMA) looks at the broader health impacts of COVID-19 in Canada. The November report, … END_OF_DOCUMENT_TOKEN_TO_BE_REPLACED