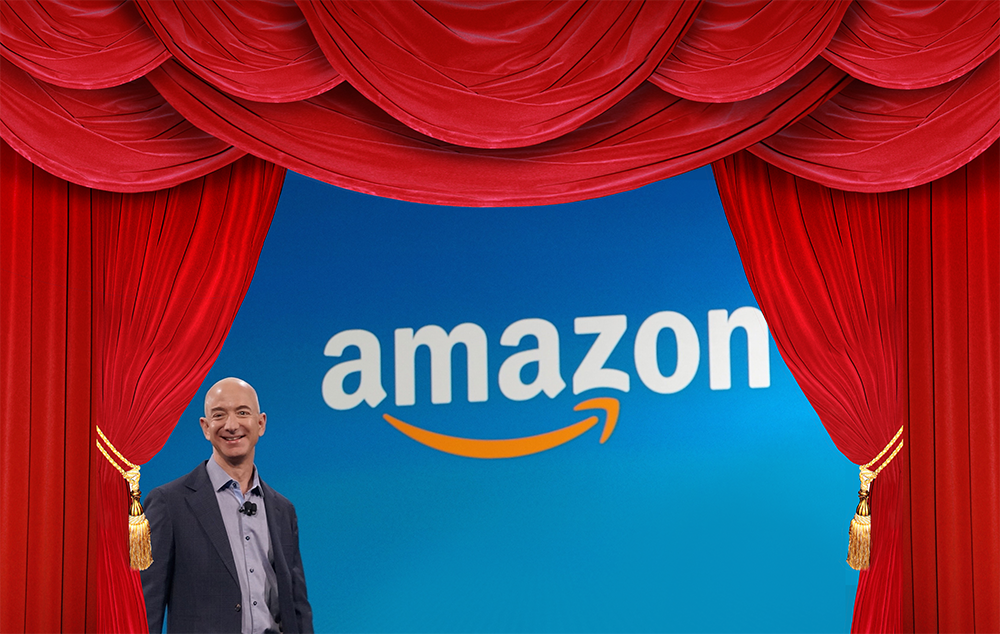 The deal to acquire MGM is the biggest move yet by Amazon in Hollywood, as Jeff Bezos prepares to step down as Amazon CEO. (GeekWire Photo Illustration.)

Amazon’s agreement to acquire MGM for $8.45 billion has all the makings of a great script, combining a Hollywood icon with an Internet powerhouse.

But will this unlikely pairing be a giant blockbuster or a massive flop?

Joining us to assess the situation on this episode of the GeekWire Podcast is Sam Blake, a reporter who covers entertainment and media for dot.LA, the technology news site for Southern California.

Here’s how he put the news in perspective in his coverage this week: “Ninety-six years after Metro Pictures, Goldwyn Pictures and Louis B. Mayer Pictures merged to form MGM Studios, the Hollywood mainstay best known for its roaring lion mascot is set to join a trillion-dollar business empire best known for selling household items over the internet.”

MGM would provide Amazon with more than 4,000 films and 17,000 TV shows that have collectively won more than 180 Academy Awards and 100 Emmys.

The film library includes the James Bond and Rocky franchises, as well as television shows such as “The Handmaid’s Tale” and “Fargo,” and reality shows such as “Shark Tank” and “Survivor.”

Coming soon to a screen near you? In case you missed it, this was our visual representation of Amazon’s MGM deal this week. (It was @Taylor_Soper’s idea.) pic.twitter.com/YdH9kP9TQ9

Amazon’s MGM acquisition would be the second-largest deal in the Seattle company’s history, behind its $13.7 billion purchase of Whole Foods in 2017.

The deal is subject to regulatory approval. It was announced during the same week that Washington, D.C.’s attorney general filed suit against Amazon.

Listen above, and subscribe to GeekWire wherever you listen.

The UK tech community has reacted with an outpouring of shock and sadness upon learning that Tech Nation, the entrepreneur network that has supported … END_OF_DOCUMENT_TOKEN_TO_BE_REPLACED

© APFedEx will cut more than 10 per cent of its global leadership team, adding to the more than 12,000 employees it has shed over the past seven … END_OF_DOCUMENT_TOKEN_TO_BE_REPLACED

The Westfield Town Council voted 7-1 on Tuesday to introduce an ordinance that allows for a downtown redevelopment plan to move forward.It will next … END_OF_DOCUMENT_TOKEN_TO_BE_REPLACED