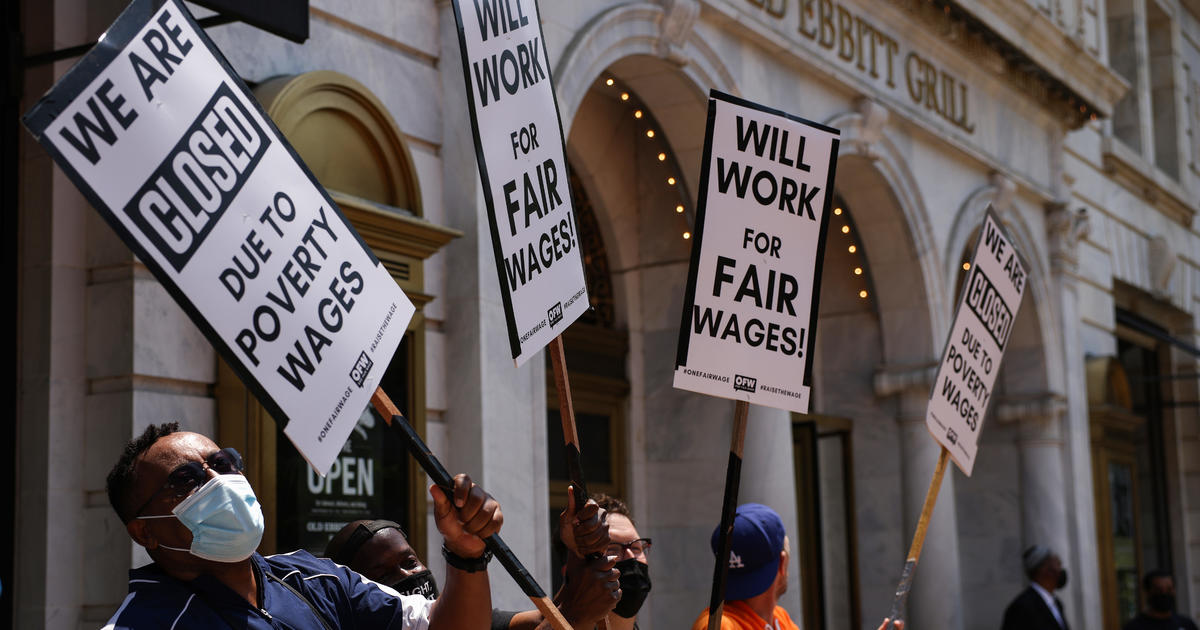 For two years, John White has been trying to get a permanent job at the company where he’s a contractor, but his applications to open positions there have been rejected five times. Company policy forbade contractors from working remotely during the pandemic, so even while his colleagues worked from home, White has been commuting to work. “I’ve physically been in the office every day that I have worked here,” recalled White, 38.

When he’s asked for raises, the staffing company and the client each blamed the other party. The last straw was when he asked his direct manager for a raise. According to White, she suggested he “leave and come back in under a different contracting company.”

White did leave — for a competitor. Four days after this conversation, the Louisville resident lined up a job offer with a rival company paying an additional $2 more per hour, as well as paid time off and health insurance. On his last day, he brought in a cake, bearing the message, “Sorry for your loss.”

Today is my last day at this job, so I left them a cake. pic.twitter.com/qilzNDnOti

White is one of millions of American workers who’ve quit their jobs in recent months. Even with 9.8 million people unable to find employment, others are quitting at record rates — pushing the “quits rate” to never-before-seen levels.

Some workers are leaving for new jobs, with better pay or remote-friendly working conditions. Others have decided to start their own businesses rather than collect a paycheck. Still others are quitting with no firm plans, confident they can get a better deal elsewhere as the economy rebounds from the pandemic recession.

John White at E3, a trade event for the video game industry. The 38-year-old help-desk contractor left his job for a competitor after being passed over for raises and promotions. “I felt really surprised to see that another company seemed to be so interested in me after the company I work at has seemingly nonchalantly continually passed on me,” he said.

“The rate at which people are quitting is ridiculously high, given how high unemployment still is,” said Michael Pearce, senior U.S. economist at Capital Economics. “People are so confident in their prospects of finding a new job that they’re quitting at unprecedented rates.”

Nearly 4 million Americans left their jobs in April, according to data from the Bureau of Labor Statistics — an unprecedented number in the two decades the government has been tracking this data, pushing the quits rate 24% higher than it was before the pandemic. (Layoffs, which peaked at 13 million in March 2020, have come down to more typical monthly levels of under 2 million.)

Workers are in a rare sweet spot — primed to push for more pay, better work-from-home arrangements and other perks they feel they need to stay, and with plenty of options if they leave.

“Employers, employees, and job seekers will all need to sort out what they want in the future. Given the tightness of the labor market, employees and job seekers may have a stronger hand right now,” said Nick Bunker, research director for the Indeed Hiring Lab.

Will work for higher pay

There’s one sure way for employers to keep talent: Raise pay. Companies from Bank of America to Walmart have announced wage increases, which have been followed by surges in applicant interest.

According to Pearce, if the current rate of job quits keeps up, average wages would grow at a rate above 3.5% this year — the fastest rate in 13 years.

Nowhere is this clearer than in the food-service industry, where the typical worker earns just $20,000 annually and which has a quits rate that is double the national average. After months of closures, bar and restaurant employers are sweetening pay and throwing in perks, with pay now increasing at twice the private-sector average — 4% — since just the start of the year.

Even with a pay bump, many service workers are turning their backs on the indignities that can infamously come with hospitality work — inconsistent hours, abusive customers and a heightened risk of COVID-19. Food and agriculture workers are the most likely of all frontline workers to contract the virus, according to a preprint study of working-age Californians.

Neith Borja, a Starbucks shift supervisor, found herself working fewer hours at her downtown Manhattan location, but the shifts were more stressful, she said. The 28-year-old told CBS MoneyWatch she was constantly reminding customers to stay masked and keep far apart, while the baristas — only two — juggled drinks orders. After conversations with her manager made her feel the situation wouldn’t improve, Borja made the “huge decision” to leave work to preserve her mental health.

“I can’t continue to work and feel like … I’m just preparing for the worst — every time I went to work,” she recalled.

Before the pandemic, Borja had considered Starbucks a model employer, and had taken advantage of the company’s 401(k) retirement plan and college tuition assistance program. The pandemic experience changed that, she said. “It was very eye-opening,” she said. “Now I’m wondering what other corporations are doing to be supportive of their workers.”

Borja’s not sure what her next job will be, but she’s pretty sure it won’t be in food service. “This is an opportunity to start again, and start a new job — meet new people.”

Neith Borja with her daughter in New York’s Central Park: “Having a very needed picnic with my child a week after putting my mental health first.” The 28-year-old recently left her job as a shift supervisor at Starbucks after working for the company for four years.

From worker bee to boss

Not only are restaurants, retail stores and transportation companies struggling to fill open positions, but they can barely hold on to the workers they already have. Daniel Zhao, chief economist at the job website Glassdoor, predicts this will accelerate for several months, as workers who stayed in less-than-ideal jobs during the pandemic search for greener pastures.

Which doesn’t always mean a new job. Millions of Americans have started new businesses, pushing up the business formation rate last year to a 15-year high.

Post-pandemic resignation boom may be looming…

Albi Michelle, a New York-based fashion buyer of 15 years, has always wanted to own her own business. The pandemic year — during which time she contracted COVID-19, was sick for a month, spent up to 13 hours a day working at a computer and saw colleagues step back from demanding jobs to spend more time with their kids — pushed her to take the plunge. She hoped that being her own boss would allow her more personal time, including time to start a family.

She now runs two businesses: Alez Group, a luxury items wholesaler, and an apparel line that’s not yet been named. Just six months after starting Alez with a friend, Daisy Perez, Michelle says the income from the business is already the same as her corporate buyer salary — even though she’s working fewer hours.

“Money is important, but to me I can’t even explain how much happiness freedom means. It’s so nice to just go away and take a few days,” said Michelle, speaking with CBS MoneyWatch from Curacao, where she was celebrating her 36th birthday.

Albi Michelle (left) and Daisy Perez (right) work on their business, Alez Group, while on a trip to Tulum, Mexico.

However, for newly empowered workers, the honeymoon days are likely numbered. Economist Heidi Shierholz cautions against reading too much into the data from April, “which is a very, very long time ago in COVID terms,” she said. In May, wage growth slowed considerably and employers added nearly 600,000 jobs — hardly a sign of a long-standing shortage, Shierholz pointed out.

The economy is still 7.6 million jobs below its pre-pandemic level, and despite all of April’s quits, the month ended with half a million more unemployed job seekers than open positions. How long it will take for the other 7 million to return is an open question. In the meantime, those who can work are in the drivers’ seat, enjoying the ride while they can.

The University of Plymouth, the AHSN Network and Boehringer Ingelheim, has launched evidence-based recommendations to drive inclusive digital health … END_OF_DOCUMENT_TOKEN_TO_BE_REPLACED

This year’s Rising Stars of Private Equity has been published at a time of great uncertainty for the sector, as the young professionals on our list … END_OF_DOCUMENT_TOKEN_TO_BE_REPLACED

If you know of local business openings or closings, please notify us here.PREVIOUS OPENINGS AND CLOSINGS· Air Products and Chemicals Inc.'s chosen … END_OF_DOCUMENT_TOKEN_TO_BE_REPLACED